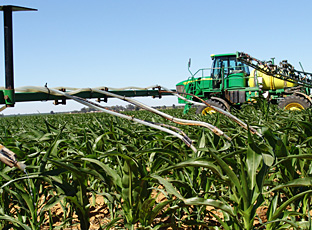 The claim is often made that liquid fertilizer leaches easily. To determine whether there is any truth to this, it must be determined which raw materials were used. The raw materials have different reactions in the soil, which will determine availability and the possibility of leaching. This applies to both liquid and granular products and the differences must be determined accordingly.

The plant takes up most nutrients from the soil in simple ionic form as macro-elements, namely potassium (K+), calcium (Ca2+) and magnesium (Mg2+), as well as various micro-elements. Others are absorbed in a more complex ionic form such as nitrogen (ammonium nitrate NH4+ or NO3-), and phosphorus which is primarily absorbed as H2PO4. The nutrients should be available to the plant in the soil solution or the plant should be able to readily exchange it, hence the ionic form. In this manner plants release H+, which exchanges cations such as K+ that is adsorbed on the clay particle's negative charge. The plant makes no distinction between the sources of the nutrient, whether it comes from organic products or inorganic sources such as dry and liquid fertilizer. The nutrients in the soil solution are also subject to leaching as water flows through the profile. Availability and leaching, the one desirable and the other undesirable, therefore go hand in hand. This is typically the case with nitrate, which is necessary for nitrogen uptake, but can also leach.

Nitrate (NO3-) is highly soluble and is the form in which the plant readily absorbs nitrogen. The plant responds quickly to nitrate application. As it is very soluble, it is unfortunately also subject to leaching.

Ammonium (NH4+) is positively charged and will be adsorbed on the clay. Since it would be bound, very little leaching would take place.

It is gradually oxidised by microorganisms in the soil to nitrate and the plant will respond slower to fertilization. Another reason is that ammonia cannot be stored in the plant and acts as a toxin if it is available in excess. Urea (NH2CONH2) is highly soluble and possesses no charge. It will quickly dissolve into the ground water and can easily leach with sufficient rain. In the form of urea it is not available to the plant through the root system at all. It is hydrolysed by an enzyme or protein to ammonium, which is bound in the soil, and then to nitrate, which in turn is soluble and absorbable for the plant.

The basis of phosphate fertilizer is phosphate rock, a crystalline calcium phosphate that is hard and insoluble. It is treated with acid which breaks down the crystal and produces soluble phosphate. The most common acid is sulphuric acid, which converts to phosphoric acid and calcium sulphate (gypsum) after the reaction process. The first commercial product after phosphoric acid is superphosphate, a soluble calcium phosphate that still contains a lot of sulphur. Pure phosphoric acid is the base from which MAP and DAP are produced, as well as almost all the liquid fertilizers containing phosphorus.

Potassium is mainly mined in the chloride form and is already a KCl crystal, or a little stone. It is grinded to have a uniform size and is red or white in colour. Other products are potassium sulphate or nitrate, which is much more expensive and not so much in use.

Chemical-granular mixtures are produced by combining the different N (nitrogen), P (phosphorus) K (potassium), S (sulphur), Zn (zinc) and other products and to granulate them into a uniform granule. Omnia, who is currently the only company in South Africa that manufactures chemical-granulated products on a large scale, uses superphosphate or nitrofos (nitric acid and rock phosphate reaction) as P source, ammonium nitrate as N source and potassium chloride as K source.

During the manufacturing of bulk blend products the different N, P, K, Zn, and sometimes S, products are added together and blended. The bases that most companies - which use imported products - use are MAP, urea and KCl. For S, ammonium sulphate is used and in some cases ammonium nitrate is also used as N source. The individual products' granules can be distinguished, and the bigger the difference, the more segregation and application problems will be created.

Liquid fertilizers are produced by the ammonification of pure phosphoric acid which leads to the forming of ammonium phosphate (MAP). The ammonium phosphate starts to form small crystals when the pH comes close to 2. The process is terminated if clear mixtures are produced. If further ammonification takes place, clay must be added to keep the phosphate in suspension. To further increase the nitrogen content, ANS, ammonium sulphate or urea, is used.

Difference in response between granular and liquid

If liquid fertilizer is applied to the soil, the nutrients will immediately mix with the water in the soil, causing soil reactions. Motion will take place according to mass flow and concentration differences and the band will increase to a few centimetre in size. The more macro pores exist (sand or gravel) the further the liquid fertilizer will diffuse. Uptake can happen very quickly since the soil will buffer the fertilizer against extreme pH and the full fertilizer band can be used immediately.

If granular fertilizer is applied to soil, ground water is absorbed which dissolves the fertilizer. If the ground is wet, the reaction starts quickly, otherwise the fertilizer reacts when it rains and enough water is available. Some products are hygroscopic and will attract moisture and start to dissolve. This is seen in wet spots on the ground during top dressing, where the product is exposed to the surface. Uptake depend on the amount of water in the soil

The differences in response will depend on the composition of the product. Equivalent reactions will be obtained with the same base product, for example LAN and ANS liquid. Many base products are the same – such as KCl, ammonium sulphate and urea – and will react the same, with only a difference in the time factor, depending on the soil moisture. Table 1 provides a summary of equivalent reactions between various dry and liquid products.

The addition of micro-elements can easily be done with liquid fertilizer. The mixing is smooth and small amounts can be applied evenly. The right product is to be used, which dissolves easily, does not cause crystallization, and is available to the plant. In chemical dry mixtures it can also be applied evenly, but is only available in pre-registered products and quantities.

Liquid fertilizers remain the simplest, easiest and most practical form for the bulk handling of fertilizers. The ease and speed of handling is the greatest advantage which, with the rapidly growing labour costs, is a growing consideration.

Fertilizers produced from different base products and the response of the fertilizer should be declared in accordance with the chemical reactions of the products making up the fertilizer. If apples are compared with apples, there is little difference between the liquid or dry product, with the liquid that can even be slightly better.