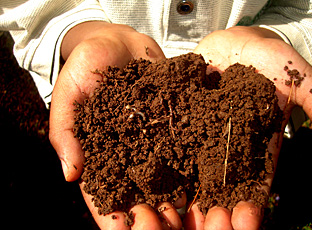 The overlooked world of free-living nematodes

These fascinating worms, commonly referred to as Round Worms, are aquatic organisms that inhabit a vast array of environments, ranging from polar regions to deep ocean sediments to hot sulphuric volcanic springs (Swart, 2011). This in itself proves that nematodes are highly specialised microorganisms and have been in existence for an estimated one billion years, making them one of the earliest and diverse types of animals on earth (Wang et al., 1999).

Nematodes are particularly abundant in marine, freshwater and soil habitats. Soil is an excellent habitat for nematodes, seeing that they inhabit water films surrounding soil particles, which also serves as a source of food. Because of their economic importance to agriculture, plant parasitic nematodes have been well studied, whereas non-parasitising, beneficial nematodes are less understood and thus their benefit is overlooked.

These beneficial, free-living nematodes feed on a diverse array of food, including bacteria, fungi, algae, protozoa, small invertebrates and also other nematodes (Neher and Powers, 2005). In theory, this inevitably means that some of these predator nematodes can be used to control the populations of plant parasitic nematodes; however, these different feeding groups have been recognised and will be further described below (Yeates et al., 1993). Feeding groups are often referred to as trophic groups and are classified by the different feeding habits of nematodes. Soil nematodes generally have the same vermiform body, but their main difference lies in the head and mouth cavity, which is closely related to their feeding preferences.

Herbivores are plant parasites characterised by the mouth part having a needle-like structure called the stylet, which is used to puncture plant cells for feeding.

Bacterivores are abundant in soil and feed on bacteria. These nematodes have a hollow tube in its mouth cavity. Bacterivores as well as fungivores play a crucial role in the decomposition of organic matter.

Fungivores feed on fungi and use a small stylet to puncture fungal hyphae.

Omnivores feed on more than one type of food material, which includes bacteria, fungi, algae and other organisms.

Predators ingest invertebrates such as protozoa, as well as other nematodes, contributing to biological control in soil. They are identified by the mural tooth in the mouth cavity.

Another specialised group of nematodes are entomop-thogenic, meaning they infect an kill insect pests through symbiosis with pathogenic bacteria; these specific species are therefore important bio-control agents.

It is evident that there is a diverse range of different types of nematodes which render them significant in playing significant roles in soil processes. Nematodes contribute directly to the biogeochemistry of soils by regulating processes such as decomposition and nutrient cycling (Neher and Powers, 2005).

Bacterivores and fungivores do not feed directly on soil organic matter, but rather on the bacteria, fungi, algae and actinomycetes which play a key role in the decomposition of plant and animal debris in the carbon cycle. The presence and feeding of these nematodes thereby influence the rate of decomposition. In addition, their feeding recycles minerals and other nutritional elements from bacteria, fungi, and other substrates and returns them to the soil where they are accessible to plant roots (Yeates et al., 1993). Indirectly, nematodes control the availability of nutrients by regulating the abundance of activity of these organisms, releasing phosphorus and nitrogen from microbes they digest, immobilising nutrients in their live tissues, excreting excess nitrogen as ammonium (Neher and Powers, 2005; Ferris and Bongers, 2006). The direct contribution of nematodes to nitrogen mineralisation and distribution of biomass within plants has been demonstrated before in controlled experiments. In 1982, Trofymow and Coleman showed in laboratory experiments that more nitrogen was available (directly or indirectly) in the ammonium form when bacterivorous and fungivorous nematodes were present as opposed to their absence. Under field conditions bacterivores and predator nematodes are estimated to contribute 8% to 19% of nitrogen mineralisation in conventional and integrated farming systems respectively (Beare, 1997).

The composition of the nematode community depends on, but is not limited to crop type, season, soil type, moisture level and organic matter content. Since nematodes are highly responsive to changes in the soil ecosystem, they are proving to be useful bio-indicators for past or present soil disturbances and soil health. The composition of nematode communities may reflect the frequency of disturbance to soil, whether the disturbance is primarily physical or chemical in origin. This concept is based on the principle that different species have contrasting levels of sensitivity or tolerance because of unique survival or reproductive properties (Yeates et al., 2009).

Nematodes can be used as effective soil health bio-indicators because they are commonly found, easy to sample, and are well classified into functional feeding groups. Nematodes differ in their responses to resource enrichment. Bacterivores generally have short and fast life cycles owing to their high reproductive potential; a spike in the numbers of bacterivores will therefore translate into a bacterial bloom (Bongers, 1990 and Ferris et al., 2001). Likewise, an abundance of the longer-lived fungal feeders indicates an abundance of fungi. Apart from these free-living nematodes, the herbivory nematodes also contribute to the food web based on direct feeding. Thus, it is said that an analysis of the nematode community of a single soil sample provides indication of carbon flow through an important herbivore channel and channels mediated by bacteria and fungi (Ferris and Bongers, 2006).

The concept of nematodes as indicators of soil health, and their historic and predictive use in soil management, represents a shift in emphasis in nematology. Omnia has been evaluating soil nematodes country-wide over the last few years, with major focus on plant parasitic nematodes. Through this research we began to understand the interrelation and correlation of free-living nematodes to plant parasitic nematodes, together with other soil health indicators such as enzymes. Through this ongoing research, it is deduced that these free-living nematodes are fundamental and useful components of sustainable agriculture. This work falls within the scope of Omnia's research, led by the Agronomic Research and Development division, which includes the OmniBio™, OmniSap® and OmniPrecise™ technologies.

Being part of the Nematode Society of South Africa enables us to keep abreast of national and global trends. On-going training, seminars and workshops are being attended in line with research and development, with recent focus on free-living genera identification, feeding habits and behavioral patterns. This training and development compliments our current ISO 17025 accreditation, which was achieved in 2010, for the extraction and counting of plant parasitic and free-living nematodes.

Representatives from Omnia attended a nematode conference in 2012 in Ghent, Belgium, which focused on "Nematodes as environmental biological indicators". The conference was hosted by the Association of Applied Biologists and specialists from 21 different countries attended and highlighted the environmental use of nematodes. They addressed questions of habitat and ecosystem changes at community, individual organism and molecular levels in terrestrial, freshwater and marine ecosystems. This resulted in the dissemination of information by scientists who aimed to understand the underlying mechanisms leading to community change. It was also observed that the use of nematodes as bio-indicators is becoming increasingly apparent and accepted in the scientific community. It was further argued and discussed that nematodes may be used as bio-indicators for a number of purposes other than soil health such as for the prediction of heavy metal contamination, indicators for compost maturity or use in water treatment. Apart from the technical insight, networking platforms were established with other scientists and companies who are also actively involved in this science. It was a privilege representing and introducing Omnia to this international platform which is gaining major focus in soil health for sustainable agriculture.