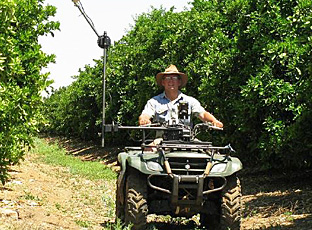 The use of long-term yield monitor data to manage risk and fertilization strategies:

This article deals with the value of long-term yield monitor data and its application in identifying, quantifying and managing risk and fertilization strategies.

Yield monitors are used to measure several parameters through spatial position in a given field by means of various sensors as well as GPS technology. The most important parameter is, of course, the amount of grain harvested. Yield is the integration of all the facets that had an impact on a specific season. Most producers only look at the yield monitor as the harvester moves through the field in order to obtain the maximum yield harvested on the day. There is, however, so much more that a producer can get out of this information to simplify his future decision-making and increase his productivity as a result.

An employee of a well-known American company once said: "The information that this equipment gathers these days, is worth much more than the equipment itself". We should therefore ensure that the data gathered by the yield monitors is processed properly so that key parameters can be derived in order to support management decisions. One of these parameters or derivatives is the management zones obtained by comparing the relative data of a number of seasons. Even though this information is historical in nature, it can serve as a foundation on which future decisions can be based.

By using yield maps, which contain yield data from four different years for example, obvious similarities (high and low production zones) between the various seasons can be observed, even though the rainfall for all four seasons differed drastically.

Data from these four seasons were added to identify spatial management zones over time. In this case, three management zones were identified: Low, Average and High, where "Low" represented the zone where the yield realised was less than 75% and "High" was more than 125% of the average yield over the four seasons.

This management zone map (OmniZone) can be used to set yield targets for every zone in order to make effective fertilizer recommendations.

Now the question is: We have the different zones, but what should my planned yield per zone be for the coming season? This is where risk decisions have to be made.

"RiskIQ" (Graph 1) is a unique model developed by Omnia Fertilizer which plots the cumulative probability for a certain yield per zone by looking at what happened in the previous seasons. It is also applicable to crop rotation systems. 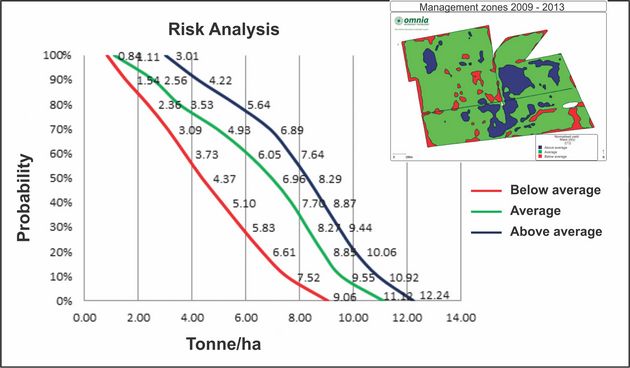 If the producer decides to aim for a yield that, according to historical data, has a 50% probability of realising, then the yield target for the "Low" yield zone (red) will be 4.37 t/ha, the "Average" zone (green) will be 6.96 t/ha and the "High" (blue) yield zone will be 8.29 t/ha. If the producer wants to approach the coming season more conservatively and fertilize for a yield that has, according to historical data, a 70% probability of realising, the yield targets will be 3.09 t/ha, 4.93 t/ha and 6.89 t/ha, respectively. The more information (seasons) used in this analysis, the more seasonal variation is taken into consideration to better quantify the risk.

Several facets of the Omnia RiskIQ model, such as the gradient of the cumulative probability curves, are quantified and intentionally monitored yearly to measure whether the applied management practices affected actual improvement and profitability.