Conventional trials follow a very involved process, especially when it comes to the implementation of the trial and the collection of the data. Farmers are not willing to dedicate large areas to a "control" as it usually leads to uneconomical yields. In addition, the trial has to be integrated with existing cultivation practices as farmers don't have extra time during the planting and harvesting process to spend on complex trials.

Yield monitor technology, together with other precision farming practices such as the variable application of plant nutrients, can however be applied very effectively in on-farm experimentations. The advantage of this approach is that more trial locations can be used on the same farm in the same harvest year, on the same scale as what the farmer is used to, without interfering with his existing practices. It also simplifies the collection of large amounts of data (at a minimal cost) and creates the opportunity for the measuring and modelling of spatial influences.

Examples of these types of trials include among others:

As with any form of technology, a number of potential problems associated with this trial approach exist. The trial layout, data analysis, accuracy of the yield sensors in the harvester, or the global positioning system (GPS) on the applicators are some examples.

To successfully implement this trial approach, certain requirements need to be met in order to avoid these potential problems. The most important one will be explained in view of a trial done according to this approach during 2011 on maize in the Vredefort district.

Various factors (i.e. soil type, soil fertility, topography, compaction, drainage, cultivation, etc.) can influence the outcome of a trial and it is therefore important to limit / eliminate such factors as much as possible when deciding on a trial layout. If identifying a uniform area is not possible, treatments should be laid out in strips (so-called strip trial) next to each other and perpendicular to the factor which causes the largest variation. If any variation in the yield exists, this will ensure that it can be explained and interpreted in a responsible manner.

It was not possible during this trial to take the above factors into consideration as the trial plot had been reserved especially by the farmer for this specific trial.

Figure 1 shows an aerial photo of the trial block, indicating the trial layout. 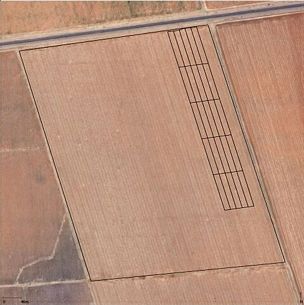 It is important that the treatments fit the existing cultivation practices of the producer. For example, ensure that the application rates planned for the treatments stay within the minimum and maximum application rates of the fertilizer applicator. In addition, as few treatments as possible should be done with as many replications as possible. Ensure that the differences between treatments are big enough to observe a crop response, i.e. to increase nitrogen (N) applications by multiples of at least 20 to 30 kg/ha N. If the farmer will not allow a control (i.e. no fertilizer), the rest of the field can act as a control (the farmer's existing practice).

It was decided to use five treatments and five replications for this trial (Table 1 on page 18) in a completely randomised block design (Table 2). Treatment 3 was the farmer's regular practice where Supers (10.5) and NH3-gas are applied pre-plant using a primary rip cultivation. The Supers (10.5) and NH3-gas are applied variably according to the P levels and yield potential of the soil on the lands where chemical and physical soil data are available. The planting mix and planting rates remained the same throughout. Consequently it was possible to merge the application rates for each treatment with the prescription map for the specific field beforehand without disrupting the farmer's cultivation practice. Figures 2 and 3 on page 19 shows the variable application maps for the Supers (10.5) and NH3-gas for the trial location as well as for the different trial plots.

When plots are laid out in strips, the producer's cultivation practices will determine the minimum plot length and breadth. A minimum length of 100 meters will ensure that the 50 meters in the centre will be representative of the plot. This leaves enough room for the applicator to reach the prescribed rate of the specific treatment, especially when making use of a variable application map.

The breadth of the plot will be multiplications of the breadth of the combine table. If controlled traffic is used, one combine lane will be sufficient, provided that the harvest direction remains the same and the soil surface is even. When the plot is against a slope and the combine follows a zig-zag pattern, the strip should be at least two harvester lanes wide and the average of the two lanes should be used. If controlled traffic is not used (i.e. with wheat), the strip should be at least three harvester lanes wide and only the data from the centre lane should be used.

Application rates used for every treatment 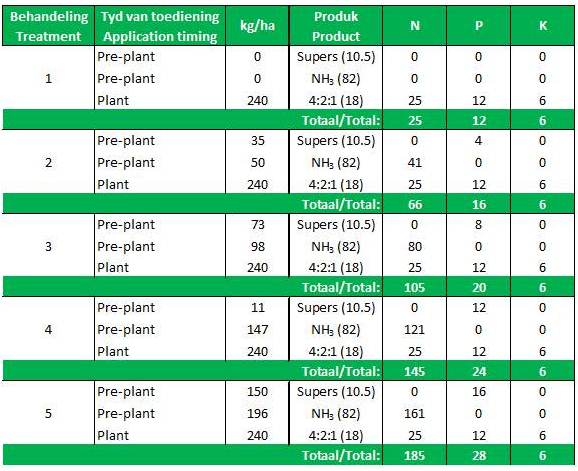 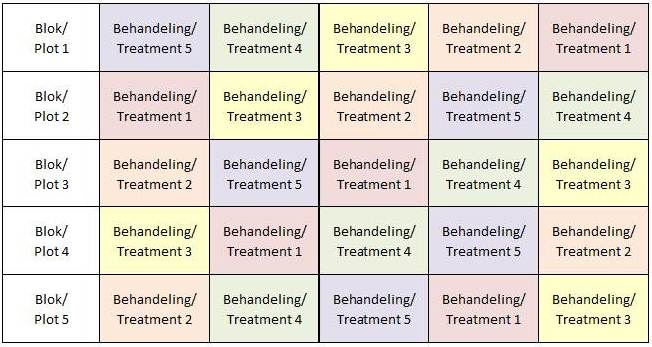 The strips in this trial were 100 meters long and two harvester lanes (15 meters) wide as the farmer was using controlled traffic, but didn't harvest in the same direction every time.

Yield monitors are very convenient in the collection of yield data, as the system keeps a record of individual loads, as defined by the operator. In the case of strip trials, every strip can therefore be assigned a unique load number. When a strip trial planted perpendicular to the direction of the variation (i.e. slope) is harvested, both strips should be harvested in the same direction to limit variation caused by an inconstant harvester speed.

Yield monitor data points can be used to generate a yield map, which is very useful in interpreting spatial variation. This is done by correlating the yield data with the additional spatial data, i.e. chemical soil maps. As mentioned, the calibration of yield and moisture sensors is very important to ensure the quality of the data. (If the sensors are not calibrated 100% accurately, relative yields can be used to show differences between treatments). All trials should preferably be harvested at a constant speed. Try not to stop unnecessarily. The statistical processing of the yield data in this trial showed that about 10 data points are lost every time the harvester stopped - based on a measurement frequency of one data point per second and an average harvest speed of 6.85 km/h.

The trial plots were harvested on 15 June 2012 as part of the producer's normal harvesting practices. As mentioned, the plots consisted of two harvest lanes, which ware not necessarily harvested in the same direction. Figure 4 shows the yield map for the whole field.

Amount of data to collect

The central limit statement argues that the distribution of the sum (or average) of a large number of independent, identically divided variances would be more or less normally distributed (the so-called Gaussian distribution). For large random trials the rule of thumb is therefore that a sample size (n) of at least 30 will be sufficient for data processing.

There was an average of 140 observation points in every plot, but since only the middle 50 meters in every strip were used for data processing, the initial average was 70 points. As mentioned before, with this trial approach there are many factors that can cause variations / outliers in data. In this case harvest speed and grain flow were identified as variables that could have a significant influence on variation in yield within each plot. Therefore data filters had to be used to remove outliers. The data were sorted from the smallest to the largest value for both harvest speed and grain flow, after which 2.5% of the smallest data points and 2.5% of the largest data points were removed. Figure 5 shows the outliers in red, pink and green; the red points indicating the variation due to grain flow, the pink points the variation due to harvest speed and the green points a combination of grain flow and harvest speed. Table 3 shows the data points removed by the data filters. An average of 63 measuring points was used for the final data processing for every plot. 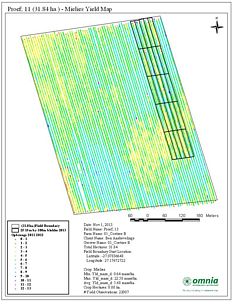 The average maize grain yields for all the treatments are shown in Figure 6. The average yield of Treatments 1 and 2 were significantly lower compared to Treatments 3, 4 and 5, with no statistical differences between Treatments 3, 4 and 5. The additional nitrogen fertilizer for Treatments 4 and 5 therefore did not result in a significant yield increase compared to Treatment 3 (farmer's practice). This is confirmed by a regression analysis (Figure 7) which shows that the economic optimum nitrogen fertilizer rate is 116 kg/ha N, calculated at a grain to price ratio of 7.85 (indicated by a green triangle.

From this it can be deduced that the farmer's normal nitrogen fertilizer practice of 105 kg/ha N was very close to the economic optimum for the area, rainfall and season. Even though the average potassium levels for this trial location were relatively high (K = 195 mg/kg), it can be argued that additional potassium fertilizer could have resulted in a more significant response for Treatments 4 and 5. The suggestion therefore is to investigate the effect of additional potassium fertilizer on the yield of maize at this location.

The number of data points removed by the data filters

Graphic representation of data points that were removed 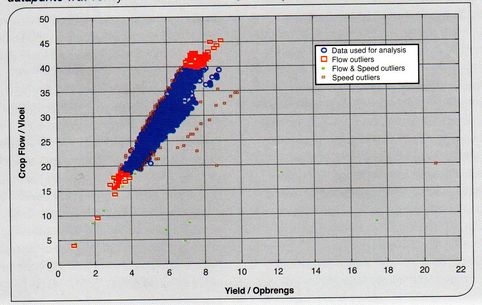 ANOVA for the average yield data 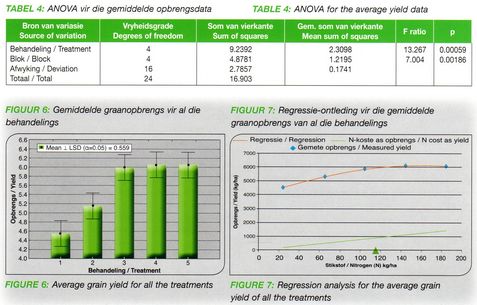 Technology in the form of precision equipment and yield monitors enables agronomists to conduct large scale trials without unnecessarily inconveniencing the farmer. This technological trial approach is not a substitute for university type pot and plot trials. It can, however, be used effectively to demonstrate small scale trials on farm level and even for statistical confirmation, provided that these basic guidelines are followed and trials are implemented correctly.